Informations :
The Ouya never got any official Minecraft release despite the fact that the game appeared in promotional videos.

Very disappointed back in the days, I decided to see if there is any way to play some Minecraft when I got the console back from my cousin a few weeks ago.
As you may know, the Ouya runs an ancient Android version (4.1) and Minecraft dropped support for it way back in July 2015 with the v0.12.1 alpha release. Sadly, the official bedrock dedicated server (the tool to run a server on a PC) only came out with the release of Minecraft v1.6 in August 2018.
Furthermore, the game crashes when you reach the Xbox live connecting screen… and Minecraft v1.10 removed the possibility to remap the controller keys…

With a bit of work, I successfully modified Minecraft v1.9 to run on the Ouya. However, some compromises need to be made.

First of all, the trigger buttons are not recognized by the game. This is an issue that plagues older versions of the game as well. This issue can be fixed by remapping the keys to the L1 and R1 buttons.
Remapping the inventory keys to the d-pad seems a good idea at first, but the d-pad is not properly recognized as well. From what I tested, the d-pad stops working if you use it more than two times without moving. Annoying when cycling through the inventory…
The best idea I could came up with, is to remap the navigation right function to the A button and the crouch function to the d-pad right. Unfortunately, you can only cycle through your inventory going to the right after that.
The other issues are the skins, but there might be a way to download and add them manually. I did not test it for now.

Step 1 : Download the Minecraft version I crafted for you : Minecraft_v1.9.0.15_Ouya
Step 2 : Install it on the Ouya. (Ouya sideloading, USB stick, Network drive, adb…)
Step 3 : Head to the make menu and then go to the software part
Step 4 : Run the game
Step 5 : Remap the buttons to your liking
Step 6 : Change the default username

If you want to play with the community, I am hosting 2 servers running 24/7. If you want to join us, add those two servers in the server tab : 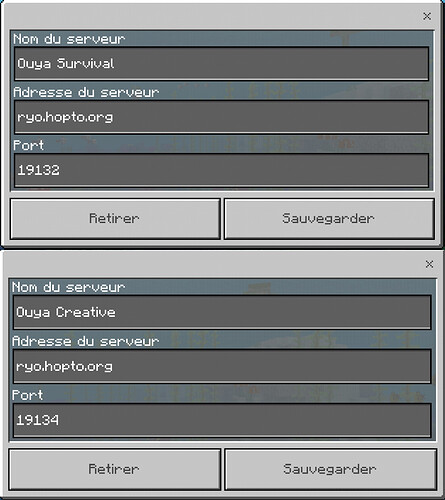